… to strengthen cooperation for greater cohesion, inclusion and sustainability in the Mediterranean

The General Assembly of the CPMR Intermediterranean Commission (CIM) was held in Marseille on 20-21 June at the invitation of the Sud – Provence-Alpes-Côte d’Azur region, in the margins of the Summit of the two Shores, convened by the President of the French Republic, Emmanuel Macron.

Nearly one hundred representatives of Intermediterranean Commission Regions, European (Commission and Committee of Regions) and Euro-Mediterranean (Union for the Mediterranean) Institutions, as well as partner organisations, including the networks of the “Mediterranean Cooperation Alliance“, launched in Barcelona in February 2019, and the Center for Mediterranean Integration (CMI), discussed in particular the future of cohesion policy, the future of territorial cooperation programs, in the post-2020 period. They also discussed the challenges and opportunities for youth, including mobility, training and research, transport and the blue economy, but also and above all, emphasised the main threats and actions to be implemented in relation to climate change and biodiversity protection. 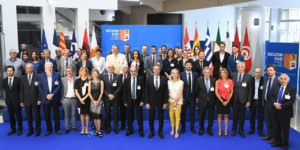 On the occasion of the opening session of the International Seminar organised as part of the General Assembly on Friday 21 June, the President of the Sud Region, Vice-President of the CPMR Intermediterranean Commission, Renaud Muselier, host of the event, said “Together, we represent 150 Regions from 28 countries in the European Union and its Southern and Eastern neighbourhood. Together, we represent more than 200 million citizens. Together we can influence the decision-making of states and Mediterranean strategies. It is also together that we can help each other and exchange to build the big projects of tomorrow. By combining our strengths and working on what unites us rather than what divides us, we can make a difference.” Mr Muselier also presented the CPMR Mediterranean Regions’ contribution to the Summit of the two Shores on Monday 24 June in Marseille.

The President of the Intermediterranean Commission and Governor of the Western Greece Region, Apostolos Katsifaras, in turn, stated “The Alliance for Mediterranean Cooperation, which we launched in February in Barcelona, must be the spearhead of the strengthening of cooperation between our territories and lead to the development and implementation of an integrated global strategy in the Mediterranean. European policies must, moreover, allow greater cohesion between territories and citizens while promoting their development in a sustainable way. The Blue Economy presents many opportunities for the regions of the basin, it is necessary to exploit them while ensuring the protection of our Mediterranean marine and coastal environment, and to engage the territories and the institutions at all levels in a stronger and coordinated action for the climate”.

On his side, and in a framework of global reflection of the CPMR Regions on the Future of Europe culminating in October 2020 with the approval of a CPMR Manifesto on “the importance of territories“, Davide Strangis, Executive Director to the CPMR, recalled “the importance of joining forces to prevent European policies from overlooking the needs and potential of peripheral and maritime regions. The latter must be at the centre of EU reforms, which must ensure territorial cohesion, genuine sustainable development, renewed neighbourhood relations and provide specific support for territorial investments, while strengthening shared management with the regions.”

The first session of the International Seminar was dedicated to the Future of Cohesion and Cooperation in the Mediterranean with a focus on the socio-economic and neighbourhood dimensions. In this regard, Ettayeb el Masbahi, Vice-President of L’Oriental Region (Morocco) recalled that “The southern shore of the Mediterranean is the point of contact between Europe and Africa. It is therefore necessary to strengthen cooperation between the two shores of the Mediterranean in order to promote the development of these territories.”

Nanette Maupertuis, Regional Councillor of Corsica, which holds the presidency of the CPMR Islands Commission, and Rapporteur of the Committee of the Regions on the Future of European Territorial Cooperation, in turn, welcomed the substantial progress in the negotiations while pointing out, however, some limits of the European Commission’s proposals and more recently of the Council, in particular the need to remove the 150kms limit in the criteria defining cross-border maritime cooperation, which generates various eligibility problems for Mediterranean islands and coastal regions. 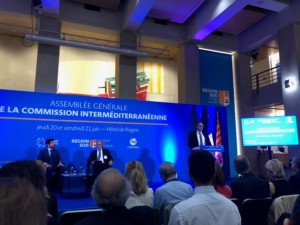 In the session on the Youth in the Mediterranean (Youth policies, Research, Big Data, Education, Mobility & Training), Gaetano Armao, Vice-President of the Sicily Region, stated: “The digital revolution is a new page to write for cooperation in the Mediterranean. It is a strategic element for the development of young people, enterprises and public administrations at all levels and their policies.”

In connection with the debates of the two days, the Intermediterranean Commission Regions, in particular, ratified their 2019-2020 biannual action plan and approved a final Political Declaration to be circulated to all European and Mediterranean Institutions.

The Mediterranean Regions will continue to work on several projects and initiatives during the year 2019 and will meet again on 16/18 October in Sicily, Palermo, for the CPMR General Assembly. Then in Occitanie Region, for the next Intermediterranean Commission Political Bureau to be held in Montpellier in February 2020. And in May 2020, the General Assembly, as well as as the Commemoration of the 30th anniversary of the Intermediterranean Commission will be organised in Sevilla, in Andalusia.

Read the Final Declaration of the CPMR Intermediterranean Commission.

Read the other articles related to the event: