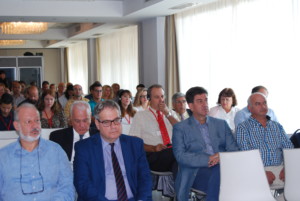 After 3 years of rich, intense and fruitful collaboration to improve sustainable planning in Mediterranean touristic coastal areas, the CO-EVOLVE project officially ended in October 2019. The final conference of CO-EVOLVE was held in Kavala (Greece) on 2 October 2019. It gathered around 60 people, including CO-EVOLVE partners and representatives of the Co-Evolve4BG, representatives of the Region of East Macedonia and Thrace and of the town of Kavala to discuss the final results of the project and explore future actions.

The project’s plan of transferability of results at pilot areas and at Mediterranean scale has also been released. It synthesises the main outcomes of the project and provides, in a practical way, guidelines and recommendations for the replication of CO-EVOLVE’s main outcomes, including the analyses of threats to and enabling factors for sustainable tourism, the Sustainability toolkit and the Strategic Planning.

Moreover, up until now, a lot has been done in terms of communication and enhancing CO-EVOLVE’s visibility. For instance, the consortium established strong interactions with the ‘Sustainable Tourism’ thematic community and monitored several Euro-Mediterranean initiatives and strategies of interest i.e. the UfM agenda on the Blue Economy, the WestMED initiative, the Interreg MED PANORAMED project, the Bologna Charter, and the BLUEMED Strategic Research and Innovation Agenda (SRIA).

Although the project did not have a capitalisation component, its partners decided, at an early stage, to ensure the durability of its results and their replication beyond the partnership at Mediterranean scale by seeking collaborations with other actors and other initiatives and funding opportunities. A project called “Med Coast for Blue Growth” retaking CO- EVOLVE’s rationale and methodology was set up and labelled by the Union for the Mediterranean in December 2017. This project seeks to extend CO-EVOLVE’s methodology to other Mediterranean territories, especially southern and eastern ones.

From January 2018 onwards, several initiatives were therefore carried out to involve partners from the southern and eastern rims of the Mediterranean, especially Tunisia, Lebanon, Morocco and Montenegro. Several encounters took place in parallel to internal meetings of the CO-EVOLVE project. A project called Co-Evolve4BG was submitted under the first call of the ENI CBC MED Programme in January 2018. It was approved and officially launched in September 2019.

Most of CO-EVOLVE partners are now involved in the Co-Evolve4BG project as partner or associated partner and are looking for other opportunities under other programmes and initiatives to further extend the methodology of the project. CO-EVOLVE will also be kept alive through new recently approved projects dealing with sustainable tourism, such as the new spin-off of BleuTourMed (the new Interreg MED Horizontal Project on Sustainable Tourism), as well as the strategic projects funded by the Interreg MED Axis 4 Project on Governance (PANORAMED), namely SMART MED and BEST MED. Besides, the Plan of Transferability of results at Pilot Areas and at Mediterranean scale will disseminated as broadly as possible.

The CPMR will keep promoting the project’s outcomes and seeking ways to foster the replication of its results in other Mediterranean territories.

All the project’s deliverables are now available on CO-EVOLVE’s dedicated webpage.