Meeting of the Political Bureau of the Intermediterranean Commission

Mediterranean Regions unanimously in favour of more cooperation in the Mediterranean aiming at greater sustainability of the basin! 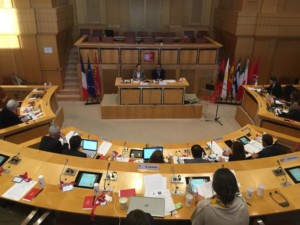 In the context of the preparation of and negotiations on the European Green Deal, the CPMR Intermediterranean Commission (IMC) held its Political Bureau meeting on 4/5 February 2020, following the invitation of the Occitanie Regional Council in Montpellier. This meeting was held back-to-back to the first Annual Assembly of the Blue Growth Community (Interreg Med). On this occasion, two policy documents elaborated in the framework of the Interreg Med programme were endorsed by the Regions.

The meeting of the Political Bureau, which took place in the afternoon of February 5th, started with Mr. Guillaume CROS’s welcome address. Vice-President of the Occitanie Region and Acting President of the Intermediterranean Commission (IMC), he recalled that “The Mediterranean constitutes a natural link between our regions.” He hence underlined the specific features and assets of the Mediterranean area which are to be sustainably exploited, in particular through cooperation projects and programmes on key issues such as climate mitigation and migration. He also insisted on the need for the Regions to be involved in the elaboration of European Neighbourhood and cooperation programmes, especially with a view to the EU’s next multiannual financial framework.

The main topic of this meeting was the political orientation of the network for the coming months, notably with the approval of several recommendation documents elaborated in the framework of projects financed by the Interreg MED programme, and in which the Intermediterranean Commission is a partner. Thus, the members discussed and approved the Blue Growth Community’s White Paper, which common objective is to develop sustainable Blue Growth in the Mediterranean. The first Annual Assembly of this Community took place the day before, symbolising the launch of its activities. The approved document identified, among other things, recommendations on three Blue Growth sectors: yachting, marine renewable energy and maritime surveillance. Emphasis was placed on transversal sustainability for the future development and renewal of these sectors. The second policy document approved concerned the MITOMED+ project, which aims to deliver sustainable and operational tourism management models.

The debates highlighted the need for sustainable development actions in the territories to be implemented in an integrated and cross-cutting way across all sectors whether they be traditional, such as fisheries, or emerging, like renewable marine energies, and in a multi-level governance approach. The approved policy documents were recognised relevant by Mediterranean regions, and the recommendations thereby issued would be disseminated in the territories and according to local stakeholders’ identified needs.

The Political Bureau meeting also addressed the new architecture of territorial cooperation programmes, for which the IMC Regions hope for improved relevance and a closer approach to territorial realities. Within this new architecture, the Alliance for Mediterranean Cooperation, or MedCoopAlliance, signed on the 4th February 2019 in Barcelona, appears to be a relevant tool due to its capacity to coordinate local and regional authorities in order to ensure a concerted and coordinated application of actions with a high impact on the territories.

Finally, the Regions have expressed a strong interest in the European Green Deal currently being set up at EU institutional level. Further reflections will be made on its implications for the key sectors addressed by the Intermediterranean Commission. Indeed, it is crucial that the territorial challenges of the Mediterranean be addressed concretely and pertinently, and the Mediterranean regions will seek to it especially in view of their next General Assembly, due to take place on the 19th-20th of May, 2020 in Sevilla, Andalusia (Spain).